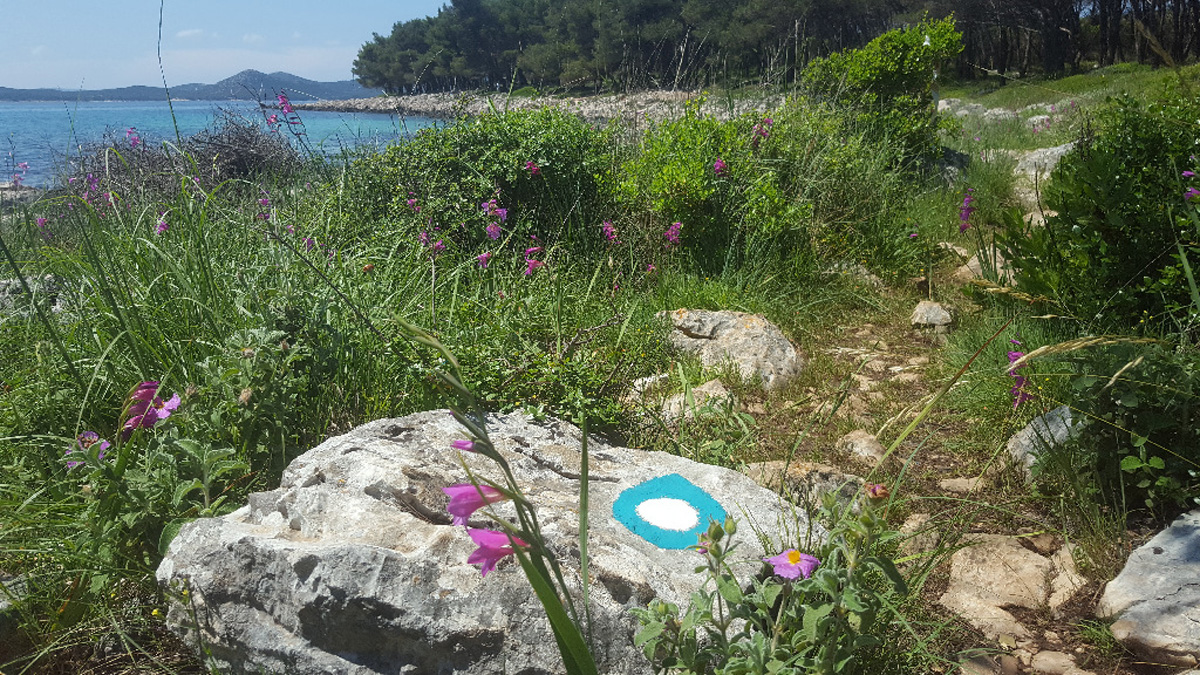 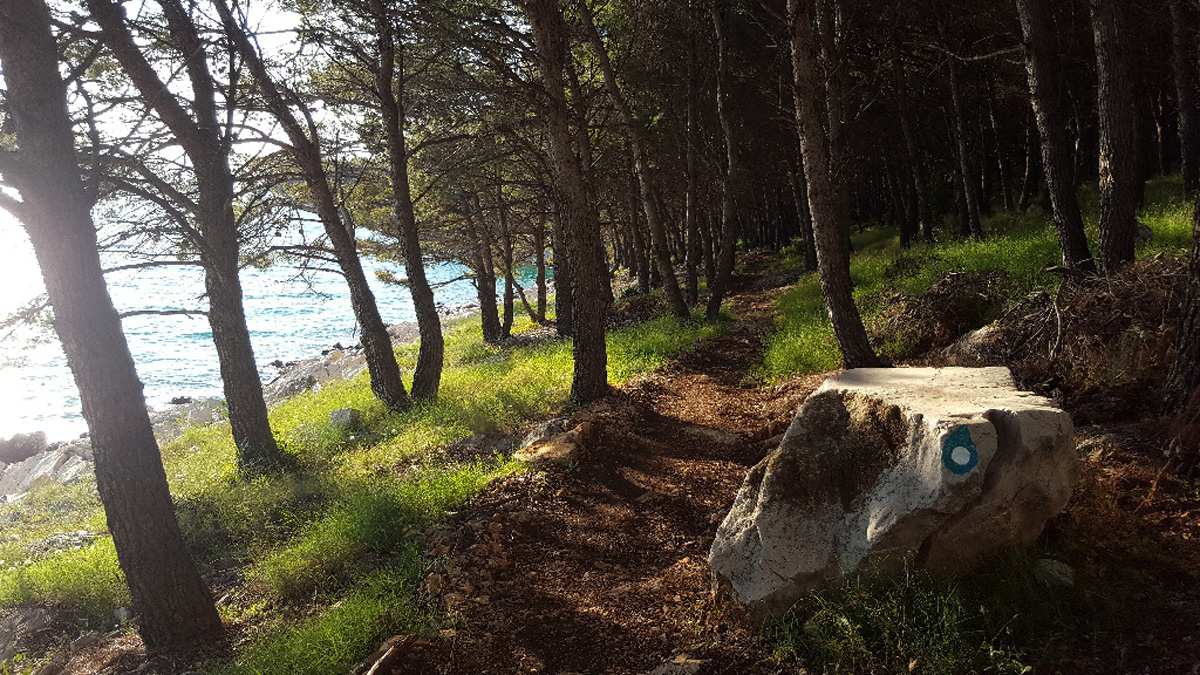 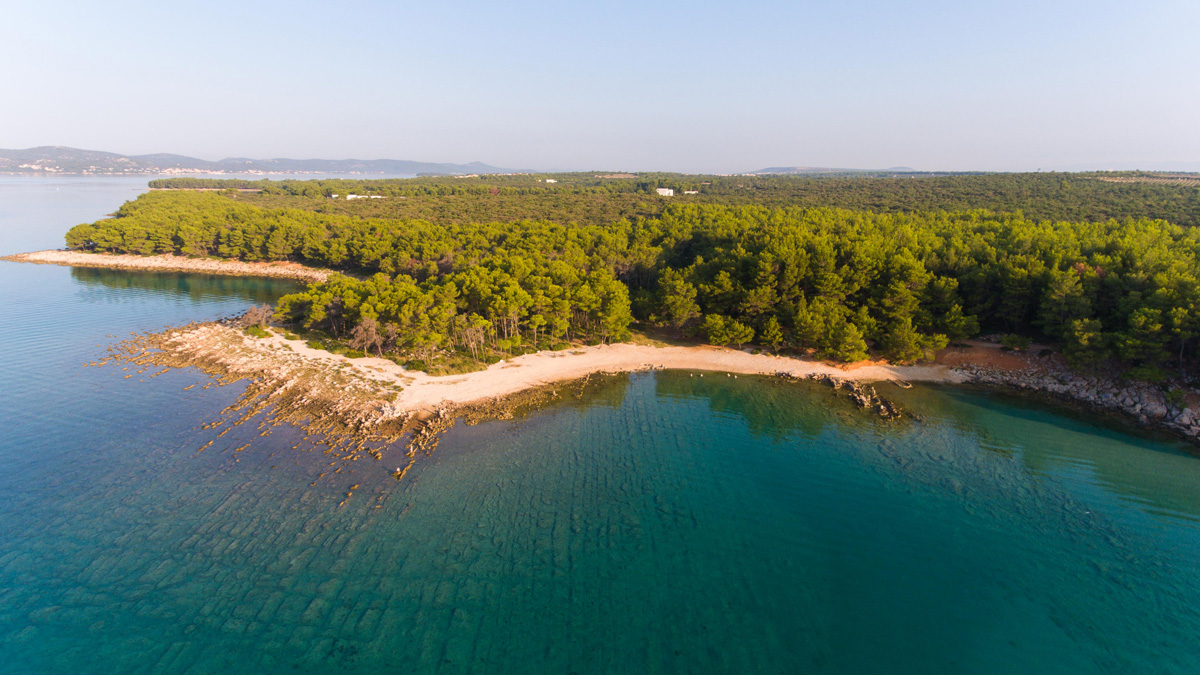 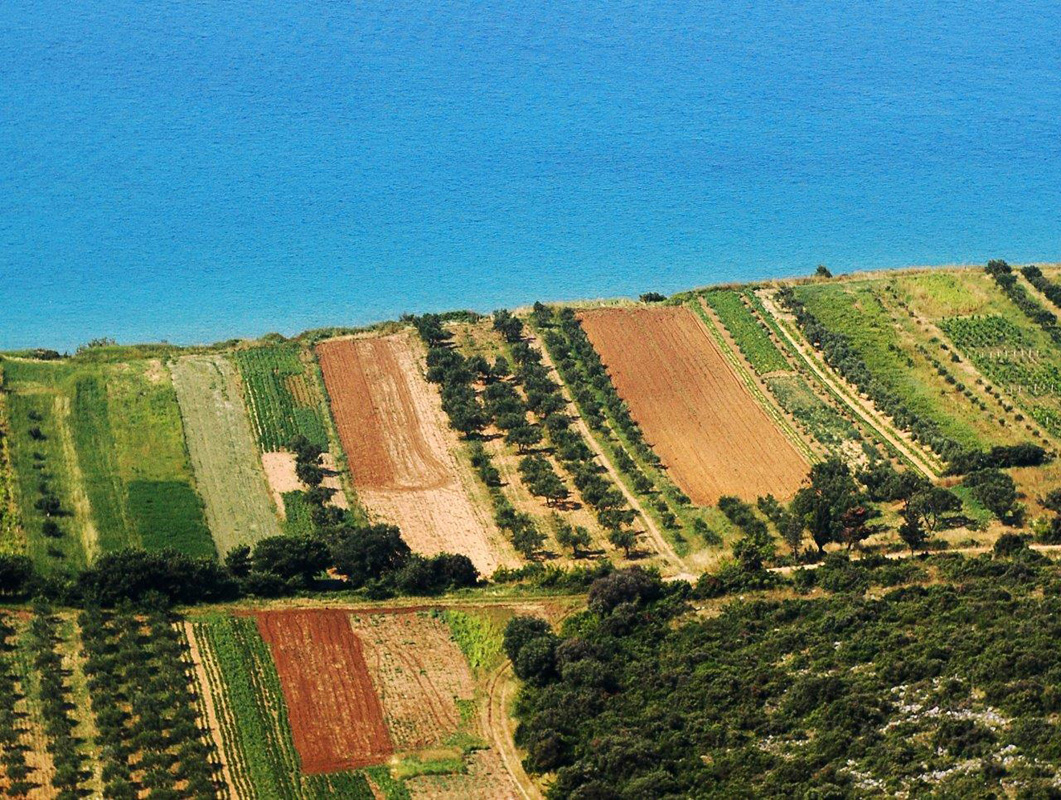 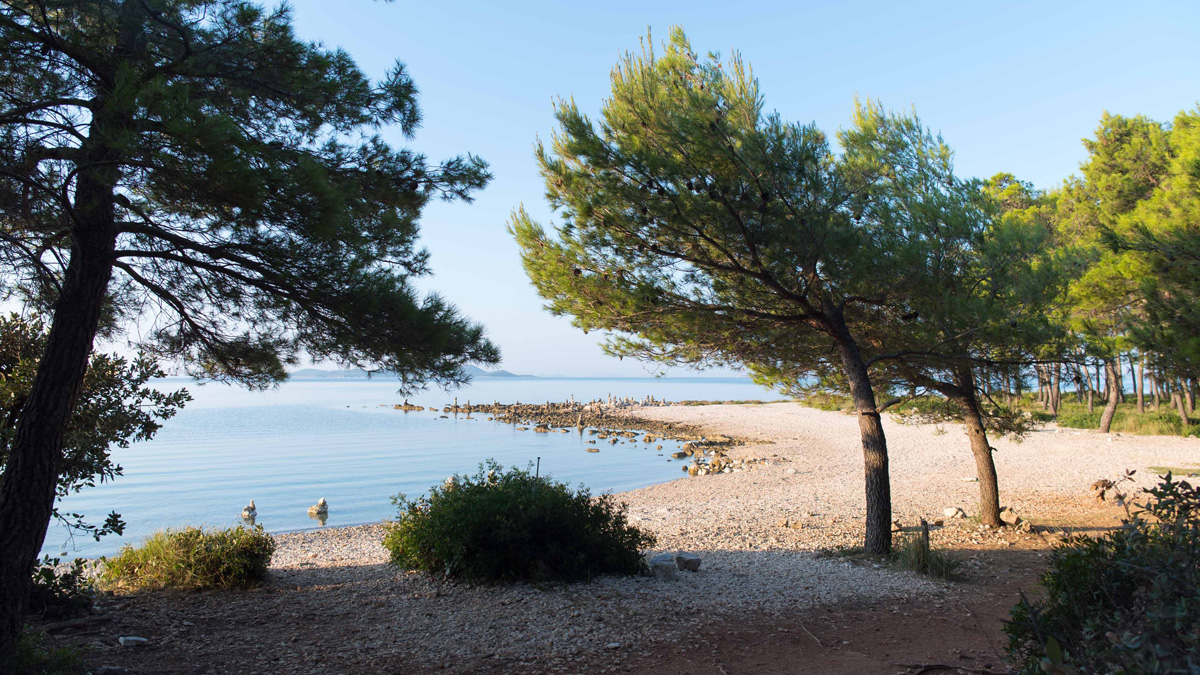 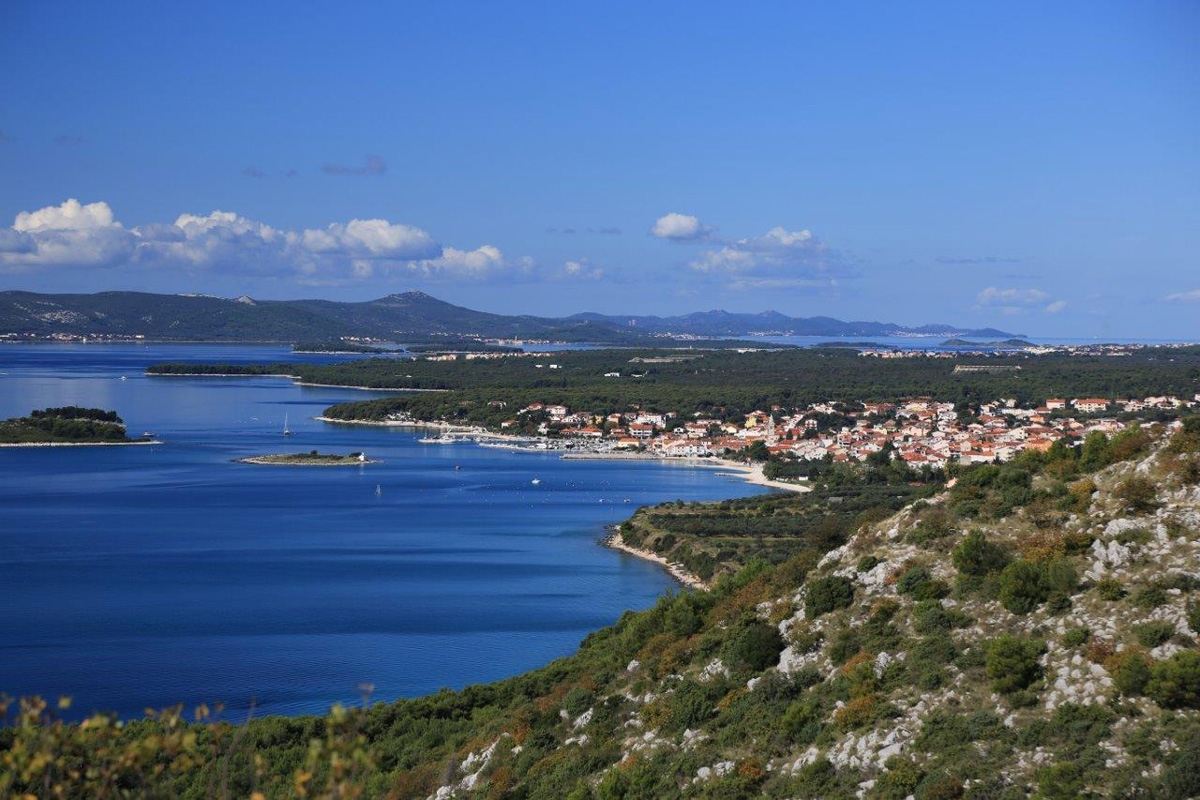 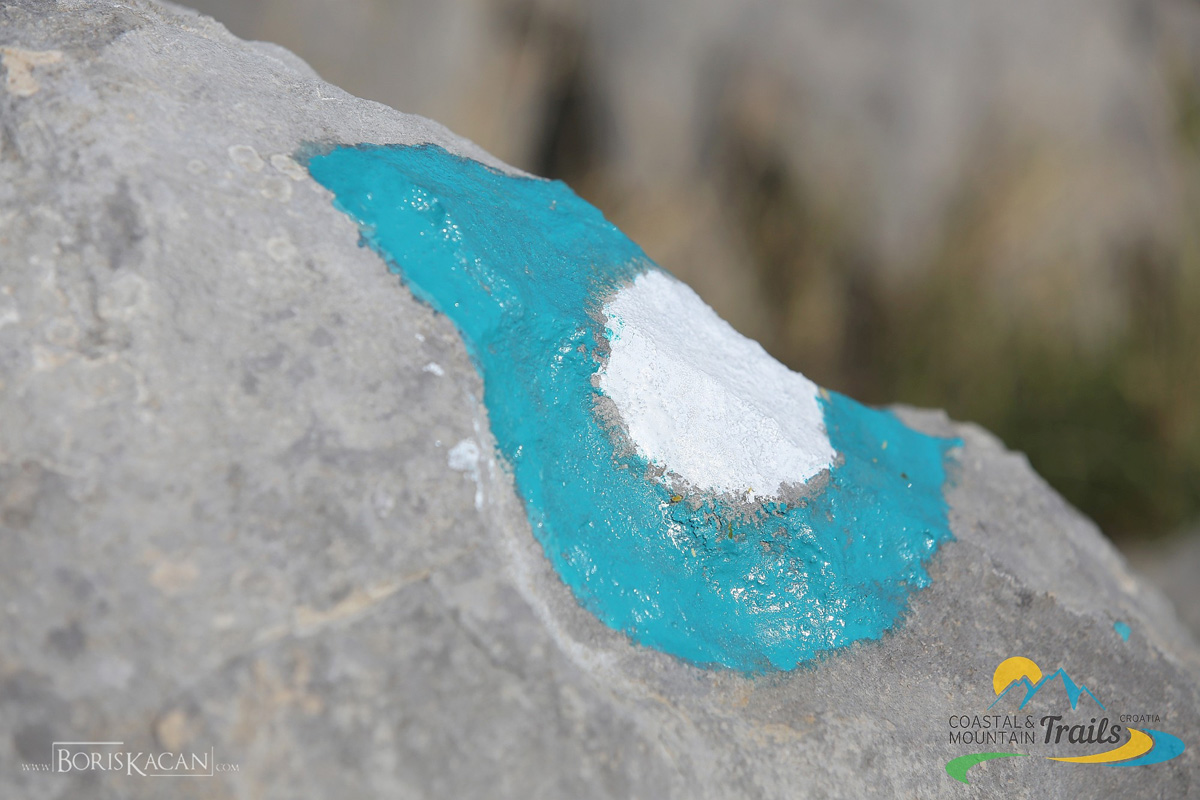 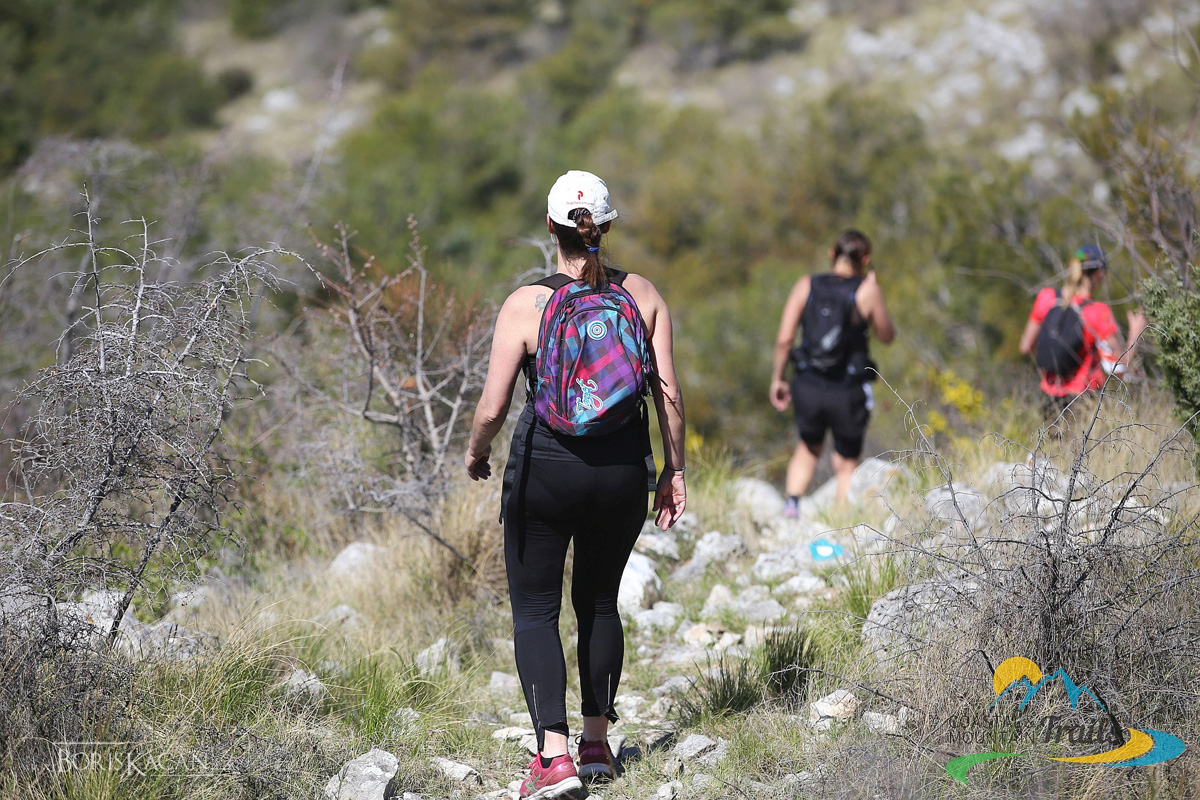 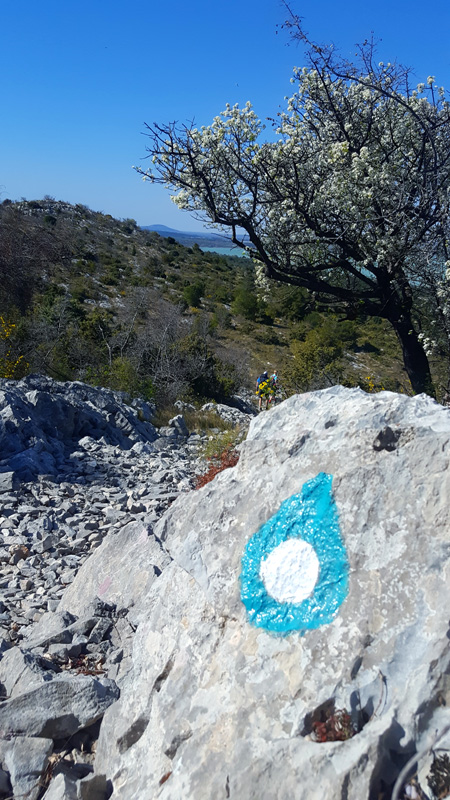 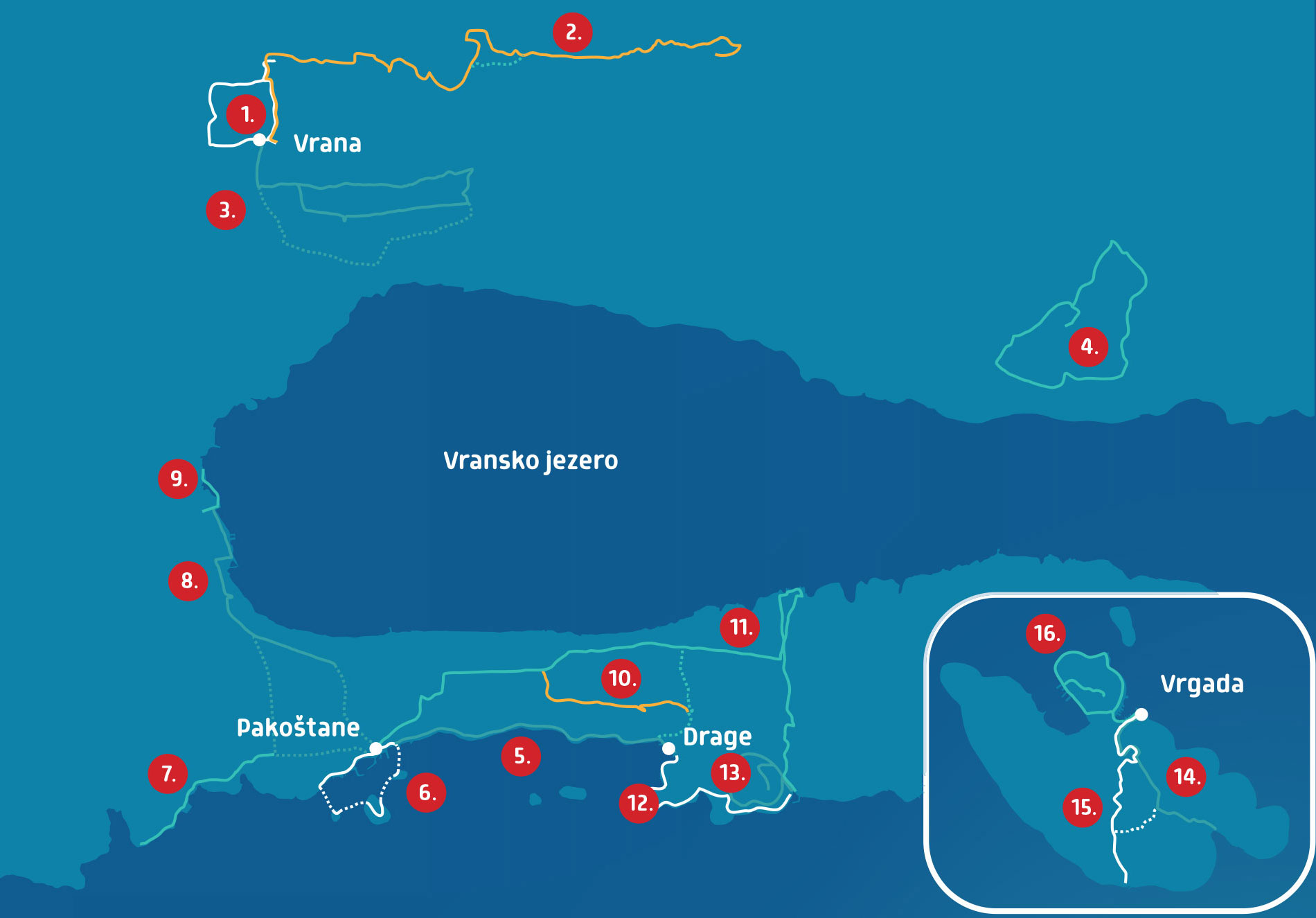 Once upon a time, there was a cave, and in it, two springs – the Spring of Remembrance and the Spring of Oblivion... This is the beginning of the legend of a mysterious prophetess that lived in Pećina above Vrana, on the Stream of Future in which, the story says, the waters from both springs meet.

This is the place where our adventure begins. Following the path of water from rich springs in Vrana, across fertile fields and the turquoise Lake, through invisible underground flows of the rocky ridge of Čelinka, to the azure sea surrounding Vrgada, we have created a network of hiking trails, which invites you to explore this unique area.

Fertile land surrounded by lake and sea attracted people searching for a better life since the beginning of time. The prehistoric Illyrian tribe of Liburni built its forts on limestone hilltops; the potentates of ancient Rome and Byzantine Empire conquered these lands; and in medieval times, Vrana was the centre for Benedictines, Templars, and Knights of St. John, as well as religious and political centre of Croatian rulers. The Ottomans and the Venetians fought for this precious part of fertile land, and turbulent past times left a rich heritage of cultural and historical monuments.

Today, when people turn mostly to the seaside, nature is slowly taking over the Lake Vrana. The protected area of the nature park provides shelter to numerous bird species, which, just like the tourists from nearby beaches, come from all around the world, enjoying security, beauty and generosity of this landscape. We invite you to walk the network of trails, and to explore, discover and experience the beauty of nature and the rich past of Pakoštane countryside.

Welcome to the Sweet & Salty Adventure!

1. Trail of the Prophetess Vrana

We head to spring Pećina from the ruins of medieval Vrana. A legend says that there was an ancient oracle by the spring, which Romans dedicated to water nymphs, and built an impressive aqueduct from springs Pećina, Biba and Subiba to Zadar (Roman Iadera). The view above the cave spreads over the valley, and the return through Pećina hamlet will give us an interesting insight to today’s life in Vrana.

2. Hiking Trail: In the Realm of Birds of Prey

Hiking trail across the hill ridge North of Vrana is designed for experienced hikers in solid footwear. It takes us through rough rocky karst with magnificent views and hidden caves, but also through pine and cypress forests above the Vrana hamlets. The trail passes by a Liburnian fort on Bak and a Roman one on Zamina, which was given the name Vran Samograd, due to its lonely location.

Built in the 17th century as a caravanserai – an inn for travellers, Maškovića Han was recently converted into a heritage-hotel with museum and restaurant. From the Han our trail passes the church of St. Nediljica and leads to the observation post on Majdan, part of the educational trail “Birds of Prey”. We can return by the graveyard church of St. Mihovil, or by a longer path near the lake reeds.

If you wish to experience the wide blueness from the peaks of Velebit to the islands of Kornati, you should climb Kamenjak, the highest peak of the nature park. There you will find a belvedere with an info-centre, chapel of All Saints, a restaurant, and two educational trails: the short one on the plateau and the circular botanical trail descending to lake dock Bašinka, on its way telling tales about the flora of this area. 5. Rampart Trail – the Balcony of Pakoštane

The seafront path from Pakoštane to Drage leads along the flysch bank, formed by sea and waves into a scenic rampart by the seashore. The trail starts at Janice beach, next to the ancient Roman harbour. The remains of the Roman pier stretch under water towards the islet of St. Justina. Since the sea level was lower then, the pier used to protect Pakoštane harbour from mighty waves.

6. The Trail of Three Isles

Thanks to the three little isles in front of Pakoštane, the town has a unique škojatlon trail: by swimming (with caution!) or paddling in a kayak, we easily reach the interesting isles which can be explored on foot. The chapel on St. Justina is the trademark of Pakoštane. On Veli Školj there is a hiking trail leading to a Liburnian fort, and Babuljaš is the smallest, but the greenest of them all. Each September the trail becomes the venue for the popular swim-trek race Škojatlon.

The beach Pilatuša on the West side of Pakoštane is the beginning of a playful trail by the sea in the shadows of pine trees. Leading us across soft pine needles, or over rough rocks, it reaches the cape Madona on the edge of Crvena Luka hotel and resort.

An ancient path from Vransko polje to the sea led through Gaz, a narrow track of solid ground passing through a muddy swamp. There, the Romans built their road from ancient Asseria to Pakoštane harbour, and templars from Vrana used it to reach their harbour in Božakovina. Next to that road was a village called Zablaće, from which remain the ruins of the church of St. Mary on Crkvine. Today, there is a road connecting the sea and the lake, the sweet and the salty, two different water worlds. Lake Route can be reached from the center of Pakoštane via the main road, or from Camp Kozarica. Attention! There are no marked pedestrian crossings on the busy road Jadranska magistrala!

Dense reed bed along the North-West shore of Lake Vrana is an ideal habitat for many bird species that build nests, find food and shelter there. Walking the wooden trail, you can “dive in” the lilting bird town, and with a bit of luck and patience, you will see its winged inhabitants. Bird celebrities of the Park are Purple Heron and Pygmy Cormorant that can build their big and heavy nests only in an old, solid reed bed. The visit to the ornithological reserve is most interesting during bird ringing between August and October, when birds adorned with light rings spread the word of Lake Vrana across the whole world.

10. Ridge Trail – Between the Two Watters

Unique views of dark blue and turquoise tones of sea and lake unfold from the belvedere at the hill Čelinka above Drage. Ancient Liburni had their settlement on the West part of the ridge, from which they could follow all movements of friends or foes in the surrounding area. The path leading from the belvedere of Čelinka to the remains of the Liburnian Gradina is somewhat more demanding, and it is accessible only to experienced hikers in solid footwear.

The old path of Babilonija from Pakoštane to Drage takes us from the blue of the sea towards the turquoise tones of Lake Vrana. On the site Lokin Brig, there is a whole network of small paths that take us to the lake shore, where we can find a quiet corner for ourselves.

12. Trail of Bumbetas from Draga

Though ancient past of Drage is related to hill forts of Liburnians, its modern life is primarily bound to the sea. Scenic coves, blushing sunsets and silent songs of fishermen invite us for a walk along the sea path towards Dolačka Draga. At twilight, we can see bumbetas on the sea - lamplight fishing boats that fishermen form Drage are widely famous for.

13. The Heart of Dolačka Draga

The view from the ancient Liburnian watchtower on the peak of Kurela Mala stretches from the endless sea adorned with hundreds of islands to the smooth surface of Lake Vrana. On a sunny winter day, we can often see large dark shadows, resembling the outlines of mysterious lake monsters. Those are merely large flocks of coots and other wintering birds, enjoying the cosy climate and abundance of food.

For centuries, the hardworking people of Vrgada were steeling every clump of fertile soil from the rocks, building a vast network of drystone walls for their vineyards and olive groves. The path through that rocky labyrinth, today overgrown with dense pine forest and moss, leads to the picturesque cove Kranja on the Southeast part of the island.

Enterprising fishermen from Vrgada used to row all the way to Zadar in order to sell their night catch of fish, and today there are modern fish farms in the waters near the island. The little fishing port on the South side of the island can be reached by a shady trail through fields and olive groves.

There are two legends told on Vrgada: one of St. Andrew, whose statue was brought to the island by a storm, and the other of Our Lady of Health, whose painting never wished to leave. Thus, the painting stayed in the chapel in count’s palace, and the old church in the cove of St. Andrew is dedicated to the saint. The trail from the church ascends to the remains of the Byzantine military fort which used to protect the maritime passage to Zadar.